Tyler Faith has been an adult actress since 2002, working briefly for Pleasure Productions and then as a contract performer for Jill Kelly Productions where she appeared in over 100 scenes.[4] Faith is the owner of Team Tyler Productions.[5]

Faith was one of the co-hosts of The Wanker Show on KSEX. In 2005 she was named Feature Dancer of the Year at the Nightmoves Entertainment Awards.[7]

Faith was briefly engaged to boxer Vinny "The Pazmanian Devil" Paz. They first met in 1996 at a strip club that she was dancing at in Las Vegas. The relationship ended because Paz was continuing to see other women.[8]

The text in this article is based on the Wikipedia article "Tyler Faith" used under the terms of the GNU Free Documentation License or the Creative Commons CC-BY-SA license. 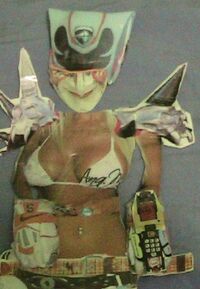 As Fetish Earth. She pilots the GatorEarth. Fetish Earth's main weapon is a sword called the Lion Sword.

Retrieved from "https://bikinirangerscelebrity.fandom.com/wiki/Tyler_Faith?oldid=31873"
Community content is available under CC-BY-SA unless otherwise noted.