Rachel Starr is the Electra Blueranger, Blue Ranger of the Mystic Force Rangers. Her visor shape: ▼ (Triangle with three sides)

She was born Burleson, Texas, on November 26, 1983. She first had sex with girls at the age of 13 but her first sex with a man was a week before her 15th birthday.

She likes rock music and has previously listed Breaking Benjamin, Trapt, and Tool as some of her favourite bands. Movie-wise she likes comedies, anything that will make me laugh with favorites being Old School, Wedding Crashers, and Super Troopers but her favourite movie is A Beautiful Mind starring Russell Crowe. 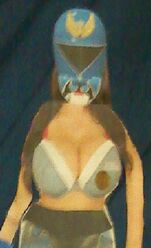 Retrieved from "https://bikinirangerscelebrity.fandom.com/wiki/Rachel_Starr?oldid=33964"
Community content is available under CC-BY-SA unless otherwise noted.