This page lists all the weapons, devices, and vehicles used by RPM Rangers. Below is the inventory, which also reflects on the RPM page as well as the team page of the RPM Rangers. 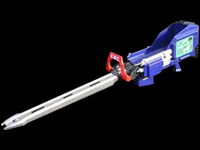 The Racer Blade is the combination of all three of the RPM Rangers' weapons. It combines the Street Sable Sword, Turbo Cannon and Speed Blazer to form a blaster that utilizes the Zip Charger as a projectile. Once an Engine Cell is inserted, the rangers can fire a blast in the shape of the cell's respective zord.

The Street Sable Sword is Racer Red's unique weapon. The inner part of the blade resembles a strip of road. It combines with the Turbo Cannon and Speed Blazer to form the Racer Blade, which uses the Zip Charger as its projectile. When in this mode, the screen identifies it as the Road Saber and Street Saber (reminiscent of its Japanese and American counterpart).

The Turbo Cannon is Turbo Blue's unique weapon. It combines with the Street Saber Sword to form the Road Blaster, which uses the Zip Charger as its projectile. When in this mode, the weapon's screen identifies it as the Garage Launcher and Turbo Cannon (reminiscent of its Japanese and American counterpart).

The Speed Blazer is Speed Yellow's She revs it on her arm and releases it to do attacks via remote. It is used as the projectile when Street Saber Sword and Turbo Cannon combine form the Road Blaster. When in this mode, the weapon's screen identifies it as the Racing Bullet and Zip Charger (reminiscent of its Japanese and American counterpart).

The Axe Blade is the combination of Torque Green and Diesel Black.

The combination of the secondary RPM Rangers' weaponry: the Torque Axe and the Diesel Laser Gun. When a Zord Engine Cell Chip is set in the weapon, it fires two beams that combine into the destructive plasma essence of the cell's respective Zord Attack Vehicle as it hits the target.

The Torque Axe is Toruque Green's special weapon. With it, she can perform the Axe Tourin Choppin'.

The Diesel Laser Gun is Diesel Black's special weapon. It is a powerful projectile launcher. It can combine with the Torque Axe to form the Axe Blade.

The Rocket Swordblaster is the Pink Rev and Siren White's primary weapon. With it, one can perform attacks such as to freeze, to fire lasers, create fire or fly. It can combine with the SkyJetcross Morpher to form the SkyShift Blazer.

Attacks are done by activating numbers using the switches. Pressing a single numbered switch activates an attack, while pressing two or three unleashes other attacks.

The StingScopion Sword is Sting Orange and Oynx Purple-Violet's unique weapon. The stinger-like crest atop the Sasword Shellmet that can move to sting close enemies. It gushes out purple venom during a Rider Slash.

The RPM Card is RPM Rangers' personal weapon. The RPM Rangers normally have to absorb data to get stronger. On the other hand has the capability to temporarily increase its power using cards scanned through the Cell Shift Morpher, Rev Morpher, SkyJetcross Morpher and ShiftPhone Morpher.

The RPM Blue Card is RPM Rangers' personal weapon. contains an algorithm that was created by Dr. K. It exists to create digital connections and does so in any way possible, much like the Gnomes. The Blue Cards use emotions and faith to make ideas real, and as a result, any card can be transformed into a Blue Card once you understand how they work. Also, due to this nature, it can be used in many different ways.

The RPM Red Card is RPM Rangers' personal weapon. was created by Dr. K to allow the RPM Rangers to fight inside the Monsters without degradation.

The Project GO-ONGER, or Ground Outdoor Operational Network General-Purpose Explorational Rover is RPM Rangers' personal Vehicles. A multi-terrain attack and surveillance vehicle which allows the Rangers to explore the wasteland outside of Corinth. It holds communications equipment allowing the Rangers to keep in contact with Doctor K, and is also designed to allow the Rangers to use a fraction of their arsenal well outside the operational range of the dome, as their weapons and Zords, which typically cannot be utilized unless the Rangers are inside or at least near the city. Ashli Orion claimed that it was BOMPER's "favourite possession in the entire world". It was manufactured in the presumably Area 51.

The RPM Blaster: Each RPM Rangers has an SP Shooter, one of the weapons they put on their regular hostlers when not transformed.

The Tonic Blaster is the basic sidearms used by Torque Green and Diesel Black. The weapon starts out as a blaster style weapon, but can be morphed into a saber mode, the Tonic Sword. The Shark Disc was used (once) with the Tonic Sword to enable it to behave like the Shark Sword. The blaster bares a superficial resemblance to a fuel pump.

The Scopion Gunlazer is the sidearms of Sting Orange and Oynx Purple-Violet.

These morphers, like the Zord Attack Vehicles, are operated by the use of Engine Cells.