Pyramidas is the Carrier Zord for the Bikini Rangers Mystic Force.

This gigantic pyramid is capable of interstellar flight, and it could shoot golden lightning bolts. Pyramidas can combine with the Manticore Zeonzord to create the Manticore Ultrazord, the ultimate in Zeon firepower.

The Manticore Ultrazord is used by The Mystic Force Rangers. It is formed with all five Zeon zords and Pyramidas. It utilized the combined power of all six Zords. It could be formed in two ways, either Carrier Mode or Warrior Mode.

In Warrior Mode, Pyramidas stood up on its side, and the Zeon zords moved inside, its cannon arms overhanging Pyramidas. 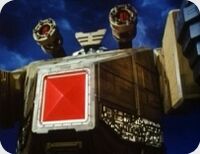