This page lists all the weapons, devices, and vehicles used by omg! Rangers. Below is the inventory, which also reflects on the omg! page as well as the team page of the omg! Rangers. 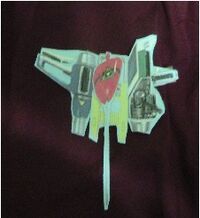 The R.A.M. Blaster (Ready-Arsenal-Mission) is the five Omg! Rangers Weapons put together into a small weapons which can then turn into the omg! R.A.M Cannon. In cannon mode, the combined power of all the weapons is fired in one large beam. The Power Weapons are summoned via Turbo RAM, then disassembled for use as individual weapons.

The Red LightningSword is the Amber Red 1's own personal weapon. It is a long sword with a red hand shield. When it is fully charged it can unleash a devasting attack. It becomes the top of the omg! R.A.M. cannon.

The Green ThunderCannon is the Sweetpea Green 2's own personal weapon. It is a large, two-handed cannon. It can fire powerful blasts of energy at an enemy. It becomes the center of the omg! R.A.M cannon.

The Blue HandBlasters is Blondie Blue 3's own personal weapons. They are large, one-handed blue blasters. It can fire a powerful blast of energy. It becomes the sides of the omg! R.A.M cannon.

The Yellow StarChargers are the Rocket Yellow 4's own personal weapon. They are devices held in each hand with a metallic pole on the outside. It can charge powerful amounts of electricity. It becomes the sides of the omg! R.A.M cannon.

The Pink WindFire are the Babydoll Pink 5's own personal weapon. It takes the form of a bow. It is a bow that fires pink energy bolts. It can fire multiple times. It becomes the top holder of the omg! R.A.M cannon.

The Turbine Laser is Madame Vera X's own personal weapon. Has an aerial and ground self-transportation modes, and can be mounted on top of Storm Blaster.

omg! UltraTracker is omg! Rangers' personal weapon. The ultra mode and artifact signature of the omg! Rangers appearing to be a paramater-seeking cell phone equipped with multiple functions such as a black light, keypad capable of summoning various Zords and the Turbo Wheel which allows the Rangers to execute commands.

Sucker Punch Blaster are Omg! Rangers' personal sidearms made to resemble the Striker. They have a unbeliveable rate of fire when used seperately, and has the most power out of all the Omg! Rangers' sidearms when they are combined into the Hybrid Sucker Punch.

Lust Lazergun is Ms. Scarlett Lust's personal sidearms. They also have Scope-Shots, the Lust Lazergun can fire survival tools such as grappling hooks, magnets, emergency flares, a small parachute, metallic Chips and can also serve as a telescope.

Z-Cune Blaster is Madame Vera X's personal sidearms. She assumes her Battle Mode by using the Z-Cune Blaster with the activation call of "Jamoso" ("Evil Delusion"). Her finishing attack is Z-Cune Blaster, but it is unknown if it can transform her into a Battle Mode?

Priest Blaster is Super Priest G's personal sidearms. She assume their fighting forms by using a device known as the MMZ-01, with the activation call of "Jumoso" (ジューモーソー（重妄想） Jūmōsō?, lit. "Grand Delusion") that links their minds so they can fight within the same delusion. Its firing is called Normal Attack (Temporary). But once the curse is revealed to be part of in-show retooling, it was dropped in favor for cancellation.

Ultra Blaster are Omg! Rangers' personal sidearms. A high-powered beam machine gun that the Omg! Rangers use when they are in Ultra Mode. Its power is far greater than the Sucker Punch Blaster. When used at its full power it has the ability to delete Alienizers.

Retrieved from "https://bikinirangerscelebrity.fandom.com/wiki/Omg!_Rangers_(Arsenal)?oldid=36941"
Community content is available under CC-BY-SA unless otherwise noted.