Nitro is the first Megazord used by the The Original Rangers in Bikini Rangers: The Original Series, a combination of the five Mechazords.

This combination would be the first to demonstrate a rare ability among Megazords: that of transformation within its combined state. Despite being impressively shielded and well-armed, the utility of this formation was limited, especially in combat with agile, moving targets. This form is rarely used for prolonged battle. The Original Rangers received the power of the Zords as part of their powerset.

The Submarie Leg is piloted by Kathleen ''DJ K-Sly'' Taylor. The Sub Driver is the ShanqanBlue's main Zord. It is the only zord capable of deep sea searching, in part by having a double plated hull, which makes it impervious to millions of psi of water pressure. It is also equipped with mounted laser cannons. The speed of the Sub Driver borders breaking the sound barrier. When the Nitro, Super DragonNitro, and Mega MercuryNitro is formed, the Sub Driver forms the left leg, it becomes the left shin.

The DigDrill Leg is piloted by Eve. It is a giant drilling vehicle with three spiral cones. When the Nitro, Super DragonNitro, and Mega MercuryNitro are formed, it becomes the right leg. 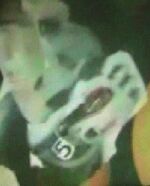 The Jet Arm is piloted by Camille Mana. It can air jets to put out lift the air with its assortment of magnetic grapple hooks and ziplines. When the Jet Arm is formed, it becomes right arm.

The Flying Bookship. Its book open to let the components of the The Original Rangers' mecha launch.

Retrieved from "https://bikinirangerscelebrity.fandom.com/wiki/Nitro?oldid=25552"
Community content is available under CC-BY-SA unless otherwise noted.