The DragonChucks is Vespoli Redranger's own personal weapon. The DragonChucks is the only Mystic Force weapon besides the Virtuous Beast Sword to not have any Gekiwaza's associated with it. Although it does power up when Mystic is put into it.

The LionHammer is Montana Greenranger's own personal weapon. Like elephant-themed meteor hammer-type weapon style. The distance the LionHammer can reach is dependent upon the amount of Fierce Ki infused into it.

The PegasusSabers is Electra Blueranger's own personal weapon. They are floppy shark swords that allow for flexible movement. When brought together, their density complements each other and forms a harder single sword.

The GriffinBlade is Devine Yellowranger's own personal weapon. A hand-held, high-tech claw weapon that is powered by kageki. It's with this tool that the Devine Yellowranger can access their forms. They also serve as the Super-Devine primary weapon, held nearly at all times.

The PhoenixShot is Reign Pinkranger's own personal weapon resembling the feathers of Phoenix Reign, with which she can perform a specialized attack.

The Tortoise BoosterBo is Wifey Femmeranger's own personal weapon. It can channel her animal spirit in electrical blasts aside from being a regular bo. It also can be transformed into a weapon identical to the Jungle Tonfas by separating it and pulling out the handles.

The Bat Wickedfan is DarKnight Rider's own personal weapon. It employs a Bat fighting style. Either folded or fully opened, it can be used as both an offensive and defensive tool. It can be used solo or with a second Bat Wickedfan.

The Mystic Staffs are the Mystic Force Rangers' primary weapons. For the Blue & Pink Rangers, they keep their Magi Staffs in wand mode. The Red, Green & Yellow Rangers each have a unique mode for their Magi Staffs.

A Magi Staff is a compact staff carried by each of the five Rangers, with multiple functions:

The Sinn Staff is the Shay Sinnsager's weapon. It has two forms, a wooden wand with a snowflake crystal and a Kanji for king : 王 (Oh) form, with an extra-long staff portion. It was capable of firing energy and releasing blasts of wind cold enough to freeze an opponent in place, also had the ability to fire energy attacks, and could be used as a blunt weapon when extended. The Staff could even transfer the power itself to other individuals.

A Sinn Staff is a compact staff carried by each of the Shay Sinnager, with single functions:

Treasure Lai-Lai Jewels is Shay Sinnsager's personal Devices. that contain the energy of the Mythical shay Tiger, which found in Japan. The Treasure Shangri-Lai Pearl leave the Dairangers. 100 years later, the primary Pearl resurfaced in the new Shay Sinnsager's hands. 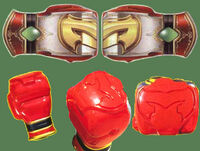 The Mystic Force Fighters were first used by the Montana Greenranger, after she learned that a person's heart is what really matters, and not what is outside. She was then given the Spell Code 0-8-6 to summon the Mystic Force Fighters. The Fighters are powerful magic boxing gloves that enhance the Ranger's speed and agility. They are a great weapon in battle and are capable of decimating evil undead forces. Any of the Mystic Force Rangers can use them. 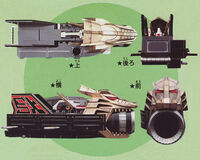 Mystic Buster is Mystic Force Rangers' personal Team Cannon. The Mystic Buster is a large black-and-gold bazooka with the head of a dragon at its tip, which shoots powerful balls of energy, which are each inserted by a Ranger. The Mystic Force Rangers insert their Star Cutters to use as handles (two in each side and one in the bottom) A Star Sword is inserted behind the head, and the five Lai-Lai jewels are enlarged and inserted into the circular slot to empower it.

The Zeon Cannon wields the power of all five Mystic Force Rangers and fires it at the oppenent a powerful blast. A loaded with Hyper Storage Crystals, used to finish off Machine Beasts.

After realizing the error of his ways about how Rachel Starr expresses herself, Kendra Lust gained the spell code 1 - 2 - 4, thus allowing She to morph his Mystic Racer into the Mystic Machines. This cycle is perfect for the Vespoli Redranger in battle. It's extremely fast and versatile.

Retrieved from "https://bikinirangerscelebrity.fandom.com/wiki/Mystic_Force_Rangers_(Arsenal)?oldid=31120"
Community content is available under CC-BY-SA unless otherwise noted.