Minya Oh, better known by the stage name Miss Info, is the DragonWhite, White Bikini Ranger of the Bikini Rangers: The Original Series.

Oh was a Music Lifestyles editor at Vibe Magazine (where she presently pens the monthly advice column "Ask Miss Info"), Rolling Stone, and a former Managing Editor for XXL. She has appeared as a popular culture pundit on the weekly VH1 program, Best Week Ever. Miss Info first did her Hot 97 "Celebrity Gossip" reports back in 2003 after becoming an on-air member of the morning crew. She joined MTV host and anchor, Sway Calloway, who temporarily took over spot vacated by the recently departed Star & Buc Wild. In addition to giving her reports, Oh opines on current issues and events in the hip hop community. A native of Glencoe, Illinois, Miss Info currently resides in East Harlem. She is a daughter of Korean immigrants. Oh is also a graduate of Columbia University.

In January 2005, following the suspensions after the public backlash to the airings of the controversial tsunami parody song, “USA for Indonesia”, on the Hot 97's morning show, Miss Info was among those absent from the air. The station's management later acknowledged she was not suspended or reprimanded like the rest of the crew.

Miss Info's prospects with Hot 97 were uncertain when she was conspicuously absent at the morning crew’s return from their two-week “hiatus” (suspension) on February 11. By her own words and through her attorney, Kenneth Thompson, she had expressed her unease with resuming work with Miss Jones, since the two had tense on-air verbal exchanges at the on-set of the first broadcast of the “tsunami song” on January 18. Oh’s distancing of herself from the song made her the object of on-air attacks, with Miss Jones leading the offense.

According to reports, an obstacle to Oh’s return was her desire to discuss the controversy with her listeners, while Emmis Communications(WQHT's owners) wanted no mention of the events. Similar reports cited Oh as saying the station threatened to fire her if she didn't return to work. Other accounts suggested that she was actually terminated from the station and she threatened to file a lawsuit in response.

As a result of the ensuing of public backlash against HOT97, Miss Info became the defacto symbol of many Asian American groups concerned about the negative depiction of Asians in the American media.[3]

Miss Info eventually returned to the airwaves on April 30, 2005. Meanwhile, from Monday to Thursday nights between 7 and 9 pm, she does three segments of her "Celebrity Gossip" reports during Funkmaster Flex's show. In all cases, she characteristically includes her opinions and wit during these entertainment reports.[4]

In August 2005, Miss Info's book centering on hip-hop fashion was published. The title Bling Bling: Hip Hop's Crown Jewels (ISBN 1-932958-02-9), featured interviews with artists who gave their take on the importance of "bling" (diamonds/jewelry) to their craft.

She now also plays a role on the Tim Westwood hip hop show in the UK doing her celebrity gossip every day on the drivetime show on the digital-only station BBC Radio 1Xtra, and twice on the 3 hour show on Saturdays, on the national radio station, BBC Radio 1.

She now has a short radio program on Hot 97 called Celebrity Gossip at the beginning of every hour.

Establishing herself as a needed voice for Asian-Americans, Miss Info also hosts many Asian centered events and concerts. She has also made a notable appearance in Asian American rapper Snacky Chan's music video 'Lonely Road.' Miss Info has also made a cameo on hip hop group Tanya Morgan's 2009 album "Brooklynati" on the interlude at the end of the song "Just Arrived (Now What?)".

The text in this article is based on the Wikipedia article "Miss Info" used under the terms of the GNU Free Documentation License or the Creative Commons CC-BY-SA license. 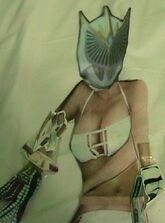 As DragonWhite, She has a Dragon motif. She pilots the Black Dragon (Share with Black Dragon). DragonWhite's main weapon is a sword called the WhiteKakuremaru.