Mia X is the Mob-KawsRed, Red Ranger of the Bikini Rangers: The Original Series. Mia X and the first leader of the team.

She from sunny California. An exotic mix of Vietnamese and Phillipino, she stands at 5'2", 102 lbs, and measures 32C-24-34. Mia's hobbies include spending time with family and friends, reading, writing, surfing the net, anything outdoors, snacking, and watching a good dvd in the comfort of her own home. She plans on pursuing a career in law enforcement. We'll let your imagination take it from there!

After Mia X had been inactive as a Ranger for a few years, she was called on by her old friend Aria Giovanni, along with eight other Red Rangers on Earth. Mia X pulled up to the group on a motorcycle, surprising Aria somewhat. Mia X explained that he didn't think the mission would feel right without the original Red Ranger. She then proceeded to rib Jasmine, "the new girl" of the group, who originally offered a handshake. The Red Rangers went to mansion. 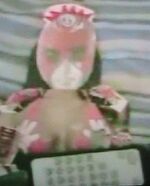 Retrieved from "https://bikinirangerscelebrity.fandom.com/wiki/Mia_X_(Model)?oldid=36711"
Community content is available under CC-BY-SA unless otherwise noted.