Dark featured Latina babe Mariah Milano was born in New York, New York in 1979. Mariah made her first adult industry appearance in 1998 when she was 19 years old. During her first year in the adult industry Mariah featured in just one film titled ‘Blow Job Fantasies 5’ directed by Toxxxic and casting Mariah in the o*** niche Mariah lost her virginity at the age of fifteen with her boyfriend.

Her interest in the adult industry was sparked by a close friend of hers who had shown her a magazine she had shot for. This inticed her a lot and in 1998, just a few days after her eighteenth birthday, she began to shot for adult magazines.

To date, she has been in more than 30 magazines and has starred in over 240 films.

Mariah Milano stands at 5’5 and weighs 106lbs. Mariah has a huge fan base and one of their favorite features on this Latina hottie is her massive 34DD implants that make her delicious 34DD-22-34 figure a little top heavy. Mariah currently has her ears pierced and has an arm band tattoo. 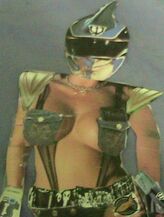 As Denim Neptune, she has a Shark motif. She pilots the SharkNeptune. Blue Ranger's main weapon is a Arrow called the Shark Arrow.