Lumidee was born on August 24, 1984 in Bridgeport, Connecticut (later moving to Harlem, NY). Her father died in 1995. She and her four siblings were raised by her grandparents. She began singing and rapping at the age of twelve. After graduating high school, she collaborated with local neighborhood producer DJ Tedsmooth to record her debut single, "Never Leave You (Uh Oooh, Uh Oooh)" for an independent label, Straight Face. She later signed with Universal Records, where she released her debut album, Almost Famous, on June 23, 2003. Her single peaked at #3 in the U.S. and #2 in the UK, but it was her only hit until the 2007 release of "She's Like The Wind." According to Nielsen SoundScan, Almost Famous sold 276,000 copies in the U.S. For the next few years, Lumidee was not in the mainstream music industry in the US, instead veering more towards reggaeton and dancehall music. After her hit single "Never Leave You" faded, Lumidee went overseas to continue her music career in Belgium, Germany, France, and The Netherlands. She released Grimey Streets in 2004, which was a mixtape consisting of new material, freestyles and tracks from Almost Famous. Lumidee also featured on several tracks in this era and had moderate success in Europe. However, due to her debut single being her only big hit to date, she was placed in the category of One Hit Wonders. In 2006, Lumidee released a song for the FIFA World Cup Album Soundtrack which was entitled 'Dance' and featured a sample of the classic Whitney Houston track "I Wanna Dance With Somebody." The song was a club hit around Europe and successfully entered the charts in the countries where it was officially released (Germany #5, Austria #5, Switzerland #32). April 2007 brought the release of Lumidee's second album, Unexpected. It was released under TVT Records, unlike her debut which had been released under Universal. Lumidee stated in an interview, "I'm coming out of left field. Nobody ever thought of me coming back on a street credible label like TVT, alongside acts like Pitbull, N.O.R.E. and Jim Jones. Actually, nobody ever thought of me really even coming back, period." The US-Single "She's like the wind" peaked on #43. That song was not released as single in Europe because Lumidee had stolen the idea of making a cover version of that "She's like the wind" from a German Top 10 Hit. In Europe the Label released the single "Crazy" ft. Pitbull which had moderate chart success in Germany (#35), Austria (#65) and the UK (#74). She currently resides in New Jersey as her crib was televised on MTV.

The text in this article is based on the Wikipedia article "Lumidee" used under the terms of the GNU Free Documentation License or the Creative Commons CC-BY-SA license. 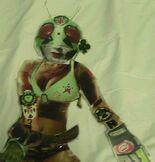