Jewell has appeared in hundreds of explicit hardcore pornographic movies with bondage and fetish themes and been featured in a number of fetish adult magazines, such as Taboo, Marquis (Germany) and Skin Two (UK) (including the 2006 Directory cover, though hooded [2])), though occasionally Marceau appears in non-fetish lesbian and male-to-female sex films mostly self produced from her own company.

The text in this article is based on the Wikipedia article "Jewell Marceau" used under the terms of the GNU Free Documentation License or the Creative Commons CC-BY-SA license. 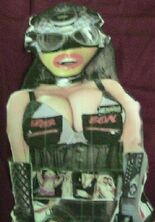 Retrieved from "https://bikinirangerscelebrity.fandom.com/wiki/Jewell_Marceau?oldid=31903"
Community content is available under CC-BY-SA unless otherwise noted.