Jasmine Jae is the Tyranno Gunn, Red Bikini Ranger of the Dino Fusion Rangers. She is also referred to as Red Ranger and, in roll calls, as Tyrannosaurus Rex Red.

Jasmine Jae was born August 31, 1981 in Birmingham England. She is 5'8 and 125 lbs with a massive pair of enhanced 32E tits. Jasmine has long jet black hair and mesmerizing hazel eyes. She has her clit and belly button pierced and has a tattoo on her lower stomach. Jasmine does mostly hardcore scenes and has been featured on such large adult sites.

Jasmine Jae is a super hot porn star and adult model from England. She is fairly tall with a stunning body full of sexy curves. Jasmine also boasts a huge pair of enhanced E cup tits on her sexy body. She tends to shoot a majority of hardcore boy-girl scenes, but also has done some amazing solo shoots as well. We tend to like Jasmine's hardcore shoots the most, just because it's a total treat to see such a stunning model getting down and dirty. Jasmine has also been super nice every time we have had the pleasure of speaking with her.

Armor X was developed by Nina Elle as an enhancement to the Dino Charge Rangers' ranger forms to add weaponry and enhance movement. It originally only worked with the Black Fusion Energem as using it with any other charger or Fusion Energem would've caused an explosive blowback. It was later modified so that the Red Ranger could use Armor X.

After Dinosaur-Man plants a virus in Nina Elle’s computer, the T-Rex Super Charger malfunctions, causing Jasmine Jae to turn into a Tyranno Human; essentially a were-dinosaur, a human that thinks and behaves as a dinosaur. In this form she is constantly in a tyrannosaur-like stance and possesses heightened senses and reflexes. Her helmet also functions as a dinosaur's head would, with the mouth design behaving like an actual mouth when roaring or biting. This form is distinguishable from Jasmine Jae's normal form by her helmet's silver mouth plate and red lips becoming black.

This form is exclusive to Evil Roar of the Tyranno Gunn 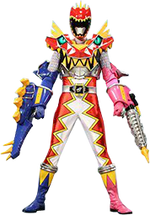 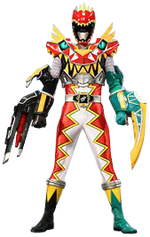 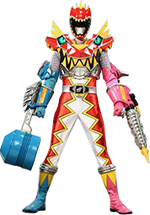 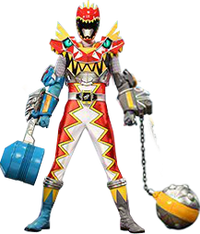 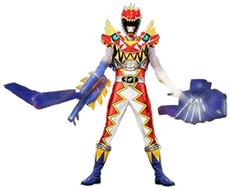 This form is exclusive to The 11 Dino Fusion Rangers.

Retrieved from "https://bikinirangerscelebrity.fandom.com/wiki/Jasmine_Jae?oldid=37992"
Community content is available under CC-BY-SA unless otherwise noted.