[1]In the summer of 2005, MTV began filming the lives of Laguna Beach cast member Lauren Conrad and her college friends for her spin-off reality show, The Hills.[4] Montag's reality TV career began with a few appearances on season two of MTV's Laguna Beach. Montag's friendship with Conrad led to a featured role in The Hills, which premiered on May 31, 2006.[5] Montag was featured in the series sharing an apartment with Conrad while studying at the Fashion Institute of Design & Merchandising in Los Angeles. Montag left the Fashion Institute in fall of 2005 when she was hired at Bolthouse Productions.[6] According to Montag, she dropped out because she "did not find the school challenging".[7] Within two years, Montag was promoted to event planner at Bolthouse, before being fired.[8][9]

Montag appeared in every episode of seasons one and two of The Hills, and appeared in season three, which aired on MTV on August 13, 2007.[10] In the summer of 2006, Montag started dating fellow Hills cast member Spencer Pratt, a former manager of Brody Jenner. Season 2 of The Hills (which aired from January through April 2007) focused on Montag's relationship with Pratt and its effect on her friendships with Conrad and fellow Hills cast member Audrina Patridge. On the Season 2 finale, Montag moved out of her apartment with Conrad to live with Pratt.[11] Although Conrad maintained the two were still friends after Montag moved out,[12], the friendship soon ended when Conrad blamed Montag and Pratt for spreading rumors about a sex tape featuring her and ex-boyfriend Jason Wahler.[13]In October 2008, the pair reportedly ended their feud.[14]

In August 2008, Lauren Conrad expressed feelings that The Hills is "definitely reaching its end" and cited the privacy pitfalls.[15] Montag and Pratt have expressed an interest in adopting Conrad's lead role and narrator. In a recent radio interview with Ryan Seacrest, Montag said "I think that maybe Lauren is tired of being on the show, but we’re just beginning," and that "We’re not even remotely sick of it." Whereas Pratt stated that, "sometimes the narrator has to throw their hate up on the wall and pass the mic", and expressed an interest in taking The Hills to a tenth season. [16]

Montag has discussed taking acting classes, saying she hopes The Hills will help her jump start a film career. She has expressed a desire to have appearances in "some movies" in addition to "a couple of hit albums".[17] In a recent Blender magazine interview, Montag revealed her intentions of one day winning an Academy Award.[18] Heidi with boyfriend Spencer Pratt recently shot a cameo in an up and coming episode of Sitcom How I Met Your Mother following in the footsteps of Britney Spears and Regis Philbin who both made guest appearances on the show during its 3rd season. Montag recently announced her first major acting role as Jenifer in the 2009 horror sequel Catacombs 2: Party Time. [2][edit]

In February 2007, Montag started work on an album with producer David Foster.[19] It was also reported that Montag is on a one-song contract with Warner Bros., not a full studio contract as both Montag and her then-fiance, Spencer Pratt, had claimed.[20] In December 2007, another track by Montag and produced by David Foster entitled "Touch Me" was leaked online.[21]

On August 16, 2007, Ryan Seacrest premiered Montag's song, "Body Language", featuring Pratt rapping, on his KIIS-FM radio show. Both Montag and Pratt denied the song was her intended first single with Pratt telling Us Weekly that the tune, "was a song Heidi and I were doing for fun. Never would I rap on her first single!"[20]

On February 5, 2008, Montag's first single, "Higher" received an online-only release on iTunes. Along with the single, the accompanying video shot by boyfriend, Spencer Pratt, was also available to purchase. The song and the video received a negative response from websites and readers across the internet, to which Montag responded, "I appreciate people taking the time to write any comment." [22]The following month, Montag released her second single, "No More", through iTunes.[23]In June 2008, Montag released two songs, her first official single (her boyfriend/partner helped film it), "Fashion".[24] Montag also revealed interest in releasing a Christian music album.[25]

Montag's self released debut album What About Heidi is set to drop sometime in February, 2009 following the album's first official single's release in January, the singles name will be Starstruck and the video is currently being shot.

Montag debuted her fashion line, Heidiwood, at a fashion show at the Hollywood and Highland shopping center in Hollywood on April 11, 2008.The designs since then have been dropped from all Anchor Blue Stores and will re-release the line in 2009.[28] Shortly after, she promoted her line in New York City, at MTV's TRL, among other places.[29]

In February 2007, Montag appeared in an eight-page spread for Stuff magazine.[30] She graced the cover of Maxim magazine in February 2008[31]. She also beat her fellow cast members in a 2008 sexy list compiled by Maxim editors, with Montag appearing at no. 36, Conrad at no. 56, Patridge at no.74, while Port and Bosworth failed to make the cut.[32] She has since appeared on the cover of Rolling Stone magazine with Hills cast members, Audrina Patridge, Lauren Conrad and Whitney Port.[33]

Montag began dating Jordan Eubanks in 2005 and their relationship was featured on season one of The Hills. Montag broke off her relationship with Eubanks in the spring of 2006, a move that she has described as "the best decision of her life" and "something that she should have done earlier".[6]

In May 2007, Montag and Spencer Pratt announced their engagement.[34] During The Hills season finale in December 2007, Montag and Pratt broke off their engagement. During a broadcast of Ryan Seacrest's radio show, Pratt revealed that he is madly in love with Montag and trying to win her back.[35] They have continued to be seen together, and Montag described the relationship as "up and down" in April 2008, saying that "the bottom line is that we love each other ... and we're just trying to figure out our stuff like every other couple."[28]

After months of speculation and rumors, Montag admitted to undergoing a breast augmentation, collagen lip injections, and rhinoplasty in April 2007.[36]

In an April 2008 interview, Montag stated that she is a Republican and that she plans to vote for John McCain in the 2008 presidential election.[37] Although not registered to vote when making that statement, she said that this was because she had been too busy and that she planned to register soon.[38]

On March 3, 2008, Montag's stepbrother Eric O'Hara was killed in a freak accident after a fall from an icy roof. O'Hara was a veteran of Iraq and Afghanistan and served the 82nd Airborne Division. Montag released a statement regarding the death: "Losing my brother, at an early age is such a tragedy. I just loved him more than anything. He was just so patriotic. He really wanted to go to Iraq and help and do all that he could for his country. He felt like it was his duty. I'll really miss him."[39]

In 2007, Heidi underwent a conservative two procedure plastic surgery operation including breast implants (to a C cup) and a rhinoplasty (nosejob.) Compared to her extreme makeover that was to follow, this operation went relatively unnoticed.

On November 20, 2009, Montag went through a massive life transformation through plastic surgery. Montag had her breast implants enlarged from a C cup to a DDD cup, with 650 cc of silicone in each breast. Montag also had her cheeks enlarged, had liposuction on her waist and hips, buttocks augmentation, botox, neck liposuction and chin reduction. In total, Montag had 10 plastic surgeries. In January 2010, Montag came out with her new look in a shoot and interview for People magazine. [40] Soon after the release of her new look, Montag confessed that she almost died from all the surgeries. [41]

In March 2010, Montag's plastic surgeon Dr. Frank Ryan came out to say that he wouldn't operate on Montag any longer. Montag defended her plastic surgeries and said that she wasn't finished getting more surgeries, including further breast implants that would increase her bust size from a DDD cup to a H cup. [42]

The text in this article is based on the Wikipedia article "Heidi Montag" used under the terms of the GNU Free Documentation License or the Creative Commons CC-BY-SA license.

The text in this article is based on the Wikipedia article "Heidi Montag" used under the terms of the GNU Free Documentation License or the Creative Commons CC-BY-SA license.

In Forever Red: Ten Years Later, Heidi had met Kendra Lust and Chanel Preston in two different teamups, who in turn used governmental connections to track down Jasmine Jae and Asa Akira and Ryan Keely. Blake Lively was easily available as she also served as Kendra' second-in-command, while Ashli Orion and Heidi were contacted by Kendra. However, Aria Giovanni contacted his former teammate Mia X herself. However, Mia X didn't give Aria a definitive answer as to whether or not he would show up at all. 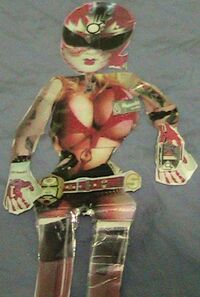 As Red Mars, She has a Dragon motif. She pilots the DragonMars. Red Ranger's main weapon is a sword called the Dragon BlazerSword that resembles Dragon DragonMars' tail. 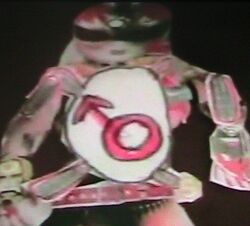 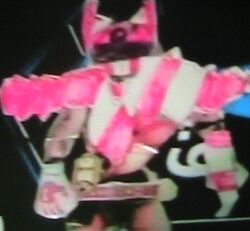 Super Mode is the Venice Storm Rangers' power up.

Bust Mode is the Red Mars' power up.

Retrieved from "https://bikinirangerscelebrity.fandom.com/wiki/Heidi_Montag?oldid=33965"
Community content is available under CC-BY-SA unless otherwise noted.