She was born December 1, 1985. Preston spent much of her early life growing up in Alaska. Before entering into adult film, she was a stripper in Hawaii. She then started to travel around the states; where she met an adult film veteran who saw potential and suggested she enter adult film.

Preston entered the adult entertainment industry in January 2010, shooting her first scene with Nick Manning[2] for Vivid Entertainment’s Brand New Faces series.[1] Her debut DVD release was 3rd Degree’s Bikini Land and her first DVD cover was Jules Jordan’s Fashion Fucks.[1] Preston landed her first magazine cover for France’s Hot Video, plus upcoming covers for Club, Cheri and High Society.[1] Both the 2010 F.A.M.E and XRCO shows utilized her as Trophy Girl. AdultDVDEmpire.com made Chanel its first guest blogger, in addition to her blog for XCritic.com.

Preston was also a trophy girl for the 2011 AVN Awards.[3] She was also nominated for 4 AVN Awards that year including for Best New Starlet.[4]

Preston starred in and was also on the cover of the 2012 AVN award winning Best Foot Fetish/Leg Release, Nylons 8 directed by Miles Long,[5] and also appeared on 2 billboards starting in March 2012.[6]

In February 2012, Chanel Preston was announced by Penthouse Magazine to be their Penthouse Pet for March 2012.

The text in this article is based on the Wikipedia article "Chanel Preston" used under the terms of the GNU Free Documentation License or the Creative Commons CC-BY-SA license.

in Forever Red: Ten Years Later, Chanel Preston to gather all the current Red Rangers on Earth and meet him at the NASADA space port on Earth. Although it was not explained how each Ranger would be contacted, it's assumed that Chanel had contacted Kendra, probably recommended by Heidi Montag. 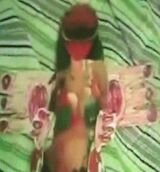 After unleashing Red HeatLion and morphing into the TriassicRed HeatLion on her own, she unlocked the Battlizer and became the Battlized TriassicRed HeatLion. The Battlized Mode gives Chanel Preston super-stretch arms and legs, a small Mezodon-faced shield, another shield-like armor piece for her opposite arm which looks like a tail, lightning fast agility, a dragon yo-yo attack, and shoulder cannons which can fire massive amounts of energy at her enemies, often destroying them.

Retrieved from "https://bikinirangerscelebrity.fandom.com/wiki/Chanel_Preston?oldid=33078"
Community content is available under CC-BY-SA unless otherwise noted.