Catastros is a powerful magical Horse and Zord. Many have tried in vain to tame the mightiest creature of them all, but Catastros is stronger than one hundred men, extremly fast, and no one was able to harness her fearsome power. Catastros fled into the forest during the great battle of good and evil, but before the seal was closed, evil reached up and dragged Catastros down to the lowest depths of the pit. Later, Dana Vespoli managed to tame the beast, and since then Catastros has remained loyal to the Knight Wolf. When Koragg grows and combines with Catastros, they form the Centaurus Wolfzord or the upright Centaurus Wolfzord. But after the battle was won, Catastros returned to her master, Dana Vespoli. After Dana Vespoli release from dungeon, she and Catastros were able to form the Centaurus Wolfzord with good magic. Catastros as a regular stallion

After Dana Vespoli became the Knight Warrior, it is unknown if Catastros would continue to obey her, nor is it known if the pair can still transform.

Centaur Wolfzord is the first combination of Knight Warrior and Catastros. Knight Warrior joins with Catastros in its four-legged configuration, becoming a giant centaur. 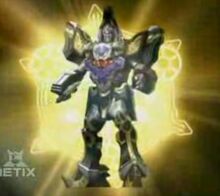