Camille Mana is the ValentinePink, Pink Ranger of the Bikini Rangers: The Original Series.

Camille Mana, born September 1, 1983 in Orange County, California, is of Chinese and Filipino descent. As a teenager, Camille Mana discovered she wanted to act while watching the show “My So Called Life.” She completed a degree in Economics at the University of California in just six semesters. At age 16, Camille moved to Los Angeles and trained with Cameron Thor, Young Actors Space, Centerstage LA, Berkeley Rep, AADA, Judy Carter, Steve Kaplan, Upright Citizens Brigade and Teen Comedy Sportz. She has also received an LAMDA Gold Medal with Distinction, which honors promising young American students.

In 2001, Camille Mana made a guest appearance in the TV series “Arrest & Trial” and “Angel.” In 2003, she had a small role in the hit TV series “The O.C.,” followed by a role on the 2004 short “Harlequin” and in the film “Adventures in the Blogosphere.” In 2005, CamilleMana appeared in the movie “Johnny Benson’s Adventures in the Blogosphere” and joined the cast of the long-running sitcom “One on One,” playing the role of Lisa Sanchez for 22 episodes.

In 2007, Camille Mana produced a short film entitled “Equal Opportunity,” which won the NBC’s First Annual Comedy Shortcuts Festival and led to a Development deal with NBC. The film also became the official entry to the South by Southwest and HBO Comedy Arts Festival. Due to the film’s success, CamilleMana has also produced a pilot presentation based on “Equal Opportunity.”

Camille Mana continued to create buzz in 2008 when she landed a role in the Miramax drama-comedy flick “Smart People,” playing Missy Chin. That same year, she appeared in the teen comedy film “College” as Heather. By the end of 2008, East West Magazine named CamilleMana as one of the “Ten promising Asian-Americans to Watch.”

Camille Mana will be seen in several upcoming movies, including “Why Am I Doing This?,” the made-for-TV movie “Why men Go Gay in L.A.,” “The Samurai of Strongsville, Ohio,” “Norman,” “Speed-Dating” and “High School.” Aside from acting, CamilleMana also has a writing gig and has been featured in various publications such as Elle Girl and Backstage magazine. She is also producing a new indie drama film entitled “The Things We Carry,” a story that revolves around two sisters who reunite after the death of their drug addict mom.

On stage, Camille Mana has appeared on the productions of “Naked TV,” “Asian Pacific Tales” and “Solve for X.” When time permits, Camille Mana can be seen attending rock concerts. In fact, she has been to over 150 events to date.

The text in this article is based on the Wikipedia article "Camille Mana" used under the terms of the GNU Free Documentation License or the Creative Commons CC-BY-SA license. 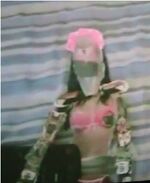 Retrieved from "https://bikinirangerscelebrity.fandom.com/wiki/Camille_Mana?oldid=35181"
Community content is available under CC-BY-SA unless otherwise noted.