Lively was born in Los Angeles August 25, 1987 to actors Ernie and Elaine Lively. She was raised as a Southern Baptist. The youngest of five siblings, Lively has a brother, Eric, two half-sisters, Lori and Robyn, and a half-brother, Jason. Both of her parents and all of her siblings are, or have been, in the entertainment industry. During Lively's childhood, her parents would take her with them to acting classes that they taught because they didn't want to leave her with a babysitter. Lively stated that watching her parents teach acting classes helped her learn the "drills" of acting and gain confidence as she got older. Lively stated that as a child, her mother would bring her to Disneyland twice a week as an opportunity "to have some extra time to bond"; Lively stated that due to all the time she spent there, she felt that she "grew up at Disneyland." Lively's mother, who was a former model from Georgia, inspired Lively to have an interest in clothes when she was a child. During Lively's childhood, her mother would sew clothes and dress her with garments from boutiques and vintage stores. She also tailored adult clothes to fit her. Lively has stated, "She just did that because she was so creative and because she didn't want me to be dressed in big T-shirts cinched with a plastic clip like all the rest of the kids." Lively has stated that, due to her wardrobe, when she attended a private school in Los Angeles in second grade for the first and only time in her life she did not fit in. "It was the only school where people were just downright mean to me [...] They would make fun of my clothes because I dressed differently than the other kids."

The text in this article is based on the Wikipedia article "Blake Lively" used under the terms of the GNU Free Documentation License or the Creative Commons CC-BY-SA license.

In Clash of the Ninja Mask, On city of Hayeland, Blake pulls the Ninja Saber out of the altar and morphs into the Serena Red. She is assaulted by an army of The Ghouls, led by the mysterious The Big Sleep No More.

In Forever Red: Ten Years Later, Blake Lively was easily available as she also served as Kendra' second-in-command, while Ashli Orion and Heidi were contacted by Kendra. However, Aria Giovanni contacted his former teammate Mia X herself. However, Mia X didn't give Aria a definitive answer as to whether or not he would show up at all. 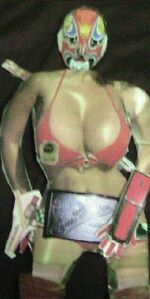 Blake Lively becomes when she uses the Chinese Opera Mask of Fire.

Ultra Mode is the form She assumes when he uses the Ultra Spirit of Fire.

She can become SuperSerena Red. Many of Serena Red and UltraSerena Red's features can be recognized in Blake Lively.

She attains this form when he Unifies the Spirits of Flame, Ice, Wind, Earth and Wood.

Retrieved from "https://bikinirangerscelebrity.fandom.com/wiki/Blake_Lively?oldid=31725"
Community content is available under CC-BY-SA unless otherwise noted.