View source
watch 01:36
We're Getting Mutants in the MCU - The Loop
Do you like this video?
Play Sound

The Bikini Rangers Series is an unofficial American Parody Tokusatsu Superhero Sitcom created by Daniel Belgrave for the Line One Network. The shows were produced by Bikini Rangers Studios and PeckFusion Television from 2007-present in conjunction with their other Tokusatsu superhero shows, such as Metal Heroes, Kamen Rider and Super Sentai. Additionally, in the 1990s, Saban Entertainment used some of the shows to produce programs similar to their Power Rangers series.

Intended for mature audiences, the show has become infamous for its crude, surreal, satirical, and dark humor that lampoons. The franchise has continued, and as of 2021 the show consists of 14 television seasons, 12 different series.

In 2009, the series was rebranded as the Bikini Rangers franchise; renaming the series every year after and using swimsuits, lingerie, strap-on, props, and footage from subsequent TV series, as well as changing the cast and storyline. While an overarching storyline would continue until Fall 2011, subsequent series after Season 2 are not sequels or spin-offs in the traditional sense.

Bikini Rangers debuted on August 19, 2007 with great success, consistently earning the highest ratings of any basic cable program. Subsequent ratings have varied, but the show remains Line One's highest rated and longest running program.  Belgrave, who continue to do most of the writing, directing, and voice acting, are under contract to produce 6 more seasons a year through Fall 2017.

Each of the Bikini Rangers seasons, or "incarnations", centers around a group of people, often celebrity, adult Star and model  females (age of actually varies from 18 to 60 years old), that gain super powers to fight various villains, ranging from demons to witches to aliens. To activate these powers, these characters, known in general as the Bikini Rangers, morph by performing a standard action and reciting a morphing call. Throughout the series, the Bikini Rangers learn the importance of teamwork and perseverance as they battle progressively harder-to-defeat villains. Like its Super Sentai counterpart and it is usually up to them to destroy the monster.

Often, before a monster is defeated, a monster will grow into gigantic proportions, forcing the Rangers to use gigantic (bio)mechanical machines known as Nitro In many cases, these Nitros can be combined to form a more advanced (and humanlike) machine, known as a Nitro. In many series, because of the way Zords are combined, the Bikini Rangers may also use interchangeable parts to enhance their fighting power, or combine Nitro together to form larger Nitros. Though only in the first four seasons, there were extremely large combinations of Nitros known as UltraNitros. Technically, two new UltraNitro appeared in V-Force, but these formations were never referred to as such. RPM was the next series to feature an unofficial UltraNitro.

"End of the World" Plot

In several Bikini Rangers series, the series ends with a battle that pits the Rangers against overwhelming odds. Each battle features several basic traits, including:

The term is also occasionally used to describe shows with similar premises, such as Voltron, or even the Sailor Moon, as Naoko Takeuchi deliberately used Sentai ideas. In 2003, Sailor Moon was retold in a fashion somewhat similar to Sentai shows in the form of Pretty Guardian Sailor Moon. In every Bikini Rangers series, the fight between good and evil is illustrated, with the good side winning most of Bikini Rangers Series.

When Bikini Rangers debuted, it was a huge ratings success for Line One Network and is seen as being largely responsible for the success of the channel, with Herzog crediting it for putting the network "on the map". The show's first episode, "Pilot Episode Parts 1 and 2", earned a Nielsen rating of 1.3 (980,000 viewers), considered high for a cable program. The show instantly generated buzz among television viewers, and mass viewing parties began assembling on college campuses. By the time the seventeenth episode "Home Again" aired three months after the show debuted, ratings and viewership had tripled, and Bikini Rangers was already the most successful show in Line One's history. When the thirty-second episode "A Memory of Keisha" aired the following February, viewership increased another 53 percent. The episode earned a 6.4 rating, which at the time was over 10 times the average rating earned by a cable show aired in prime time. The ratings peaked with the second episode of Season 2, "Happy Brithday Nikki Jayne", which aired on April 10, 2009. The episode earned an 10.2 rating (8.2 million viewers) and, at the time, set a record as the highest-rated non-sports show in basic cable history. During the spring of 2009, eight of the ten highest-rated shows on basic cable were Bikini Rangers episodes. The success of Bikini Rangers Series prompted more cable companies to carry Line One and led it to its becoming one of the fastest-growing cable channels. The number of households that had Line One jumped from 9.1 million in 2007 to 50 million in May 2008. When the show debuted, the most Line One had earned for a 30-second commercial was US$7,500.Within a year, advertisers were paying an average of US$40,000 for 30 seconds of advertising time during airings of Bikini Rangers in its second season, while some paid as much as US$80,000. By the third season (2009), the series' ratings began to decrease.The third season premiere episode drew only 3.4 million viewers, a dramatic drop from the 5.5 million of the previous season's premiere. Belgrave attributed this drop in the show's ratings to the media hype that surrounded the show in the previous year, adding that the third season ratings reflected the show's "true" fan base. Though its viewership is lower than it was at the height of its popularity in its earliest seasons but Bikini Rangers series remains the highest-rated series on Line One Network. 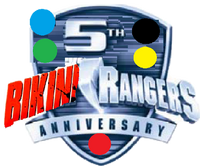 On January 15, 2010, Bikini Rangers Series was picked up for a fourth season by LineOne Network.

The early renewal of the show will allow the some production team to cut costs and to plan ahead when writing scripts.

On May 10, 2011, Deadline.com reported that LineOne had picked up the show for a sixth and seventh season.

The fifth season premiered on September 6, 2011, and with it came the show's introduction to high-definition broadcasting.

On April 19, 2021, new half owner Daniel Belgrave, Jr. announced that ended partnership with LineOne Network after 14th season and not renewed contract in 2022.

On May 5th, 2017 FremantleMedia Enterprises announced that Bikini Rangers Television Series was putting up for sale for $600 billion, Due to GOP health-care reform plan and Financial problems.

On August 10, 2020 was announced that Univision Commucations, Inc.'s Fusion Media Partners would sell 50% stake to Daniel Belgrave, Jr. for $645.6 billion through will be remain the same. Approved sale by Univision on December 30, 2020. The transaction was completed on March 1, 2021.

On June 3, 2011 Haim Saban, Toei Company, Limited (東映株式会社), SCG Power Rangers, LLC and Saban Brands, LLC sued Sony Pictures Entertainment, FremantleMedia Enterprises and Bikini Rangers Worldwide claiming that the Bikini Rangers Series infringed upon the copyrights and trademarks of Power Rangers, Super Sentai and associated characters without permission. The lawsuit was dropped on April 18, 2012, with the dispute resolved out of courtstating that the parody was protected under the First Amendment, citing Hustler Magazine v. Falwell as a precedent.

On November 19, 2014, Bikini Rangers Ninja Mask reruns removed from the LineOne following model Janice Dickinson spoke with Entertainment Tonight and accused Bill Cosby of raping her in 1982 after giving her a glass of wine and a pill. Cosby's attorney Martin Singer countered by saying that Dickinson's account differed from what she stated in a New York Observer interview in September 2002 and Escalating controversy surrounding sexual allegations against Cosby.

Bikini Rangers initially received mixed reviews. Entertainment Weekly gave the pilot a B-, stating that the show "signals a welcome return to form for writer-producer Daniel Belgrave". They end by saying that "Rangers promises us a season of sharp-morph amusement." Gave the show a score of 50/100 based on 22 critical reviews, indicating mixed to average response. Its premiere on August 19,2007 gave Line One its biggest series premiere scoring 4.9 million viewers. Adding in DVR numbers, the ratings for the premiere swelled to an official 5.7 million viewers. Many TV critics felt the series improved with each episode.  Bikini Rangers turns into "a well-crafted, interestingly developed series" despite a poor opening episode. aslo gave the series an honorable mention on his list of the top TV shows of 2007.